The Global VaticUN
How far should we go with global integration? 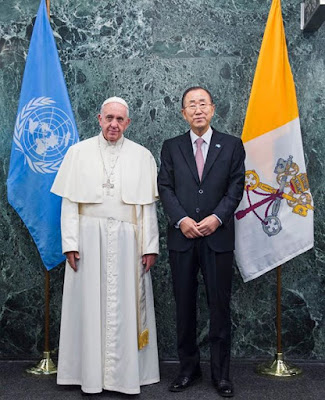 Pope Francis and the Secretary-General of the United Nations Ban Ki-moon
pose for photographs at the UN in New York, 25 September 2015. Image: AP
Click HERE for more photos.

The image above really got me thinking. Ban Ki-moon, the Secretary General of the United Nations, flanked by the flag of the Vatican, standing next to Pope Francis, the head of the Roman Catholic Church, flanked by the United Nations flag. I think I might have welcomed such a photo op in the past, including the recent past. Yet when it finally happened on 25 September 2015, I was not so sure. In fact, the image above, taken shortly before Pope Francis’ speech prior to the opening of the UN General Assembly in New York, left me somewhat disconcerted. And it did so in spite of my appreciating both men and their respective institutions (with their strengths and weaknesses).

So I asked myself, and all of us:
--How far can and should we go with global integration (GI) and as global integrators? Not just in terms of Personal GI, but also on the other end of the GI continuum, in a more macro way—Global GI?

--What does it mean when two major world bodies come together (integratively?) on behalf of humanity, and do so in the world’s most powerful nation (UN-Vatican-USA)?

--What do we get when we connect the United Nations and the Vatican—the international governing body with over 193 member states representing over seven billion people and the largest Christian church with over 1.2 billion members/affiliates.

--And so…what about the VaticUN, or the Global VaticUN? The pros and cons? Good, bad, or something in-between? Laud it, loathe it, or leverage it for people and planet? There are many perspectives.

My Take-Away
Personally, my main take-away from all of the above is reflected in the take-away from a short devotional I did today. I pondered Luke’s account in the New Testament of the transfiguration of Christ (Luke 9, also noting the accounts in the New Testament from Matthew 17 and Mark 9 and including Peter’s account in 2 Peter 1;16-18). Here it is.

“About eight days after Jesus said this, he took Peter, John and James with him and went up onto a mountain to pray.  As he was praying, the appearance of his face changed, and his clothes became as bright as a flash of lightning. Two men, Moses and Elijah, appeared in glorious splendor, talking with Jesus. They spoke about his departure, which he was about to bring to fulfillment at Jerusalem.  Peter and his companions were very sleepy, but when they became fully awake, they saw his glory and the two men standing with him. As the men were leaving Jesus, Peter said to him, “Master, it is good for us to be here. Let us put up three shelters—one for you, one for Moses and one for Elijah.” (He did not know what he was saying.) While he was speaking, a cloud appeared and covered them, and they were afraid as they entered the cloud. A voice came from the cloud, saying, “This is my Son, whom I have chosen; listen to him.”  When the voice had spoken, they found that Jesus was alone. The disciples kept this to themselves and did not tell anyone at that time what they had seen.”  Luke 9: 28-34, NIV

Applications. I remember being literally dazzled the first time I went to Vatican City and entered into an other-worldly, incense and Latin-filled, con-celebrated mass at St. Peter’s Basilica. I also remember being dazzled the first time I entered the hallowed-grounds of the United Nations in New York, making my way through the streaming diplomats and the great halls of global influence, other-worldly in its own right as well.

With time, though, we accommodate to the multi-sensorial awe. And we can look beyond the aesthetically-impressive artifacts and think more clearly about both institutions and their important, overlapping missions in the world.

The same was true for Peter, James and John who were in awe of the radiating glory of Jesus, Moses, and Elijah. Mind-blowing. Yet the story and the focus is not about Moses or Elijah, as awesome and as esteemed humans that they are. One far outshone them. It was the Beloved and Chosen Son, to whom we are instructed to listen.

The same is true for me regarding the UN and the Vatican. I really appreciate them. Yet I am reminded by the transfiguration that nothing and no one is on par with the One who is ontologically and eternally greater than either institution, or even a globally integrated-integrating institution. “For all things were created by Him and for Him, and He is before all things, and in Him all things hold together…For in Him all the fullness of Deity dwells in bodily form, an in Him you have been made complete.” (Colossians 1:16,17, 2: 8,9).

Final Thought
So, I am much more relaxed about the above image of the UN and Vatican reps. Cautious though. And I am more circumspect as I continue to make my way through the world and its institutions, as a global integrator whose heart and eyes are open to the One whom I esteem the most. I am understanding world transformation in light of the lessons from the Transfiguration.
Posted by Member Care Associates at 15:01