The 2000s
Global Faces and Facets

The 2000s were characterized by the accelerated expansion of the member care field. It was amazing!
Regional and national affiliations and networks formed or were strengthened. The Global Member Care Resources group (MemCa) become a major recognized presence in the member care field, providing a practical rallying point to help connect people together (consultations, quarterly updates, web-based resources).
Member care-related departments/emphases within sending groups became much more common. The term “best practice” was linked with an international member care model (five spheres of care) and this influential model circulated broadly (in Doing Member Care Well, 2002). Many new practitioners emerged, including those who were now writing in their own languages/cultural contexts.
Many more books were written. Materials were translated. Organizations and people put up web sites filled with helpful resources mostly in English but also in Chinese, Arabic, Spanish, etc.
There was an intentional effort to launch into new areas and learn from them. Such areas included international health care, the perspectives of local workers/newer sending countries, applications from personnel programs in the military, trauma care, human resource management, etc. (Doing Member Care Well, 2002, p. 3).
In the midst of this decade's incredible development, unresolved relationship issues and protracted serious dysfunction took their toll in a few influential places. Member care continued onward nonetheless as it was now so widespread and not dependent on one country, discipline, group, or organization for its continuance.
In short, member care became even more firmly established as it expanded. It consolidated and it grew globally. It was indeed characterized by many global faces and facets.

*****
The 10 quotes below are just a sampling from some of the many excellent materials from this decade. There are different regional/national emphases in the quotes and over ten passport countries represented among the authors.

2000: B. Kumar
Member Care Handbook: A Guide to Caring for Our Missionaries
As we enter into the new millennium, the call and challenge to the Church to fulfil her missionary obligation is louder than ever. The Church of developing nations ,who for a long time has served only as a backdrop to the strong sending churches of the developing nations, is beginning to move to the forefront of missions…Much of the emphasis of this book is on “responsible sending”, the failure of which, we feel, is the greatest cause of missionary failure (attrition)…The primary target readership for this handbook are pastors, mission leaders, missionaries, and missionaries-to-be in MALAYSIA. However, the principles and problems discussed here would apply for most “new sending countries of the two-thirds world”…. “let the shipwreck of others be our beacon of light.” (pp. 16-17)
2001: Joi Van Deventer
Caring for Hungarians
Caring for the Harvest Force in the New Millennium (pp. 181-198)
During the past ten years of freedom, most states in Central and Eastern Europe have graciously received volumes of literature and “how-to” programs from many Western Christian brothers and sisters….During these ten years, while living in Budapest, Hungary, I have been involved in designing training materials for a variety of ministry efforts….The obvious need for a new approach in curriculum design compelled me to investigate tenets of cross-cultural education. This led me to examine the complex relationship between educational materials and the entire education process, which can be said to ‘contain’ the “hidden curriculum”—the methods, models, roles, expectations, values, content, and context—of the setting….I want to focus on four specific vehicles [to get learners involved in various types of corporate and self learning]: narrative, modelling, mentoring, and promoting community in the classroom. (pp. 182, 183, 193)
2002: Marina Prins and Braam Willemse
Member Care for Missionaries: A Practical Guide for Senders
It is thrilling to see so many churches becoming involved in the sending of workers—either to render service in communities where there I a need, or as fellow workers and supporters to other churches I target areas, or to reach out as missionaries to less reached areas or groups. Today hundreds of South Africans are being sent and supported in this way by their churches. When however it comes to the sending and the support, problems frequently arise. The whole process requires a church’s sustained involvement. This includes the individual sense of call, the confirmation of that call by the church, the screening, preparation and orientation, the choice of a target area and/or church partner, to the sending by the church and its continuous support and involvement and finally ,the return of the person who has been sent. It is saddening to meet people who were sent by a church without having first gone through a process of screening and preparation—even worse when it becomes apparent that we do not have the right person In the right place….On the other hand. It is wonderful when churches are actively and responsibly involved from the outset and continue to be involved with the people they have sent out. (p. viii, from the Foreword by Martin Pauw)
2003: John Fawcett
Stress and Trauma handbook: Strategies for Flourishing in Demanding Environments
…the most stressful events in humanitarian work have to do with the organisational culture, management style and operational objectives of an NGO or agency rather than external security risks or poor environmental factors. Aid workers, basically, have a pretty shrewd idea what they are getting into when they enter this career, and dirty clothes, gunshots at night and lack of electricity do not surprise them. Intra-and inter-agency politics, inconsistent management styles, lack of team work and unclear or conflicting organizational objectives, however, combine to create a background of chronic stress and pressure that over time wears people down and can lead to burnout and even physical collapse. (p. 6). 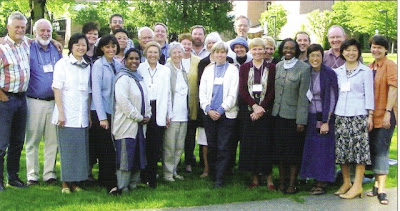 Paper/presentation at the annual Integration Seminar, Fuller School of Psychology, USA
Over the last 20 years, a special ministry within the Christian mission/aid sector, really a movement, has developed around the world that is called member care. At the core of member care is a commitment to provide ongoing, supportive resources to further develop mission/aid personnel. Currently there are an estimated 458,000 full-time “foreign missionaries” and over 11.8 million national Christian workers from all denominations (Barrett, Johnson, and Crossing, 2008—note the 2010 estimate by these researchers is 400,000). These figures do not reflect the number of Christians involved in the overlapping area of humanitarian aid, nor do they reflect the unknown number of “tentmakers” or Christians who intentionally work in different countries while also sharing their faith. Sending organizations and churches, colleagues and friends, specialist providers, and also locals who are befriended are key sources of such care. The development of member care is reflected in the many conferences and special training symposia that have taken place. Such events have been occurring in the USA for 30+ years, gaining major momentum in the 1990’s and beyond. Similar events have also occurred over the last 15 years in countries like India, Singapore, Malaysia, Indonesia, Hong Kong, The Philippines, Korea, Ivory Coast, Cameroon, Nigeria, Cyprus, Germany, The Netherlands, Brazil, El Salvador, Canada, New Zealand, and Australia. Member care has truly become international, is increasingly mainstreamed into the ethos of sending groups, and is considered to be a central part of mission/aid strategy. (p.2)
What a very special time as the member care field grew broadly
and consolidated further around the globe.
Let's celebrate!
Enjoy the video.
Posted by Member Care Associates at 14:44