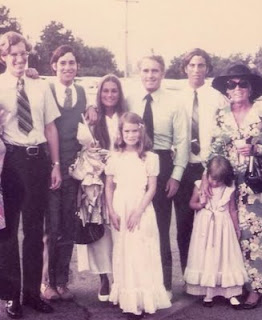 By this I mean that parents instruct and influence their children
about how to tell the truth.

It's about how kid's and all of us develop and internalize
the virtue of being honest.

I remember when I was about 15 years old. I was practicing backing the new car out of our garage in California. The car was actually a dealer car from my father’s Buick-Opel franchise. It was pretty fun having a dad who owned a car dealership. The possibility of driving lots of new cars was really exciting to me! The photo above was taken about a year later than this actual story, in June 1972, at the car dealership. This is my family. I was the fourth oldest and the third youngest.

OK. Back to backing out of the garage. I was doing this for the first time, all by myself, with my mother’s permission, fairly confident that I could do it. I was pretty much in awe to be able to drive, even if it were only for a few feet! I had begun to tackle the first stages of this developmental milestone—becoming more independent by learning how to transport myself hither and yon with the help of an internal combustion engine.

Apparently at age 15 I did not know how to back out of garages very well, as I was soon to learn. The front side of our shiny Buick station wagon hit the brick wall of the garage. This unexpected event resulted in a conspicuous dent in the car, a chunk of brick chipping off the garage wall, and a near state of panic on my part. What was I to do?


The standard tapes started to play in my mind. If I told my mom she would be angry and I would get into trouble. It would also show her and the rest of my family that I was not mature and skilled enough to drive yet. But above all, it would remind me of a spectre in my past. It was a fiasco from six years previously when I managed to crash a new family station wagon into a tree at the bottom of the hill on our street. Don’t ask. Fortunately no one was injured. But I really felt stupid, and ashamed, and scared. Anyway, back to age 15 and to the same painful feelings that were stirring deep within. What was I to do?

Well, I ended up taking the higher ethical road. I told my mom about what had happened. But only after I had taken the lower ethical road first: I clumsily glued the brick chunk back to the wall and let my mom take the car out for a drive for a day or two in hopes that she would think that the car got dented by some other vehicle (by some unscrupulous person that would not tell her of his/her driving error) while it was parked in some parking lot.

Two days later, my mom did in fact notice the dent. Somehow she just seemed to know intuitively that the dent was not due to some other vehicle or person. It was due to me. Parents seem to not only have extra eyes on the backs of their heads but special eyes that can peer into the soul. And so my mom simply asked me if I was responsible for the dent. And frankly, I am so glad she asked me because I was just swarming in guilt about how I had tried to cover up. It was such a relief to be gently confronted and to tell her the whole story and even how I tried to glue the brick back to the wall in order to disguise the scene of the crime.

I remember my mothers calm, corrective attitude. I remember her not minimizing my mistake nor the far greater mistake (sin) of covering up my mistake. I appreciate how my mother dealt with the situation and how she dealt with me. She was parenting the truth.

Trans-Transparency:
Non-Selective Honesty with Self, Others, and God

Transparency begins by peering into our own souls. Such self-scrutinizing, especially for those with member care responsibility, is to be built into our lifestyle. It is self-honesty. It is reinforced by relationships with confidants to whom we give permission to peer into our lives. And we learn it from our parents and the significant adults in our lives as we grow up, and as they model honesty to us.

Transparency also involves God in a big way. God desires that we acknowledge reality—truth—in our core being (Psalm 51:6). We entreat God to help us be transparent—to search us and know our hearts (Psalm 139:26). The search for transparency, truth, self-honesty is especially important given the fact that our own hearts, like those of all humans, are deceitful and even desperately sick (Jeremiah 17:9 ).

One other thing I have learned over the years. We usually think we are far more transparent and accountable than we actually are. A corollary to this is we believe we are acting with far more integrity and honesty than we actually may be. Still another corollary is that sometimes we are only transparent and honest when we have to be and/or after a wrong behaviour or mistake is discovered. This is why we need the light of God and others in our lives. So we must trust ourselves but at the same time not entirely so.

Consider this next quote from Bennis et al in Transparency: How Leaders Create a Culture of Candor (2006). As I shared in the previous entry, if there were a book I would recommend right now to colleagues in member care and mission/aid it would be this one. Especially the first chapter. Read and discuss and apply it! Remember, it is not just about “them.” It is about all of us.

"The best way for leaders to start information flowing freely in their organizations is to set a good example. They must accept, even welcome, unsettling information. If leaders regularly demonstrate that they want to hear more than incessant happy talk, and praise those with the courage to articulate unpleasant truths, then the norm will begin to shift toward transparency. Transparency is one evidence of an organization's moral health." (p. 42)
Reflection and Discussion

1. Think of a time when you made a mistake and tried to cover it up? What did you feel inside, what did you do, and what did others do?

2. Is there something currently that you need to be transparent about?

3. How much transparency is appropriate and with whom are we transparent?

4. Find a few ways that the above quotes from Bennis et al apply to your life and work setting.

Posted by Member Care Associates at 19:15