Developmental Musings on Being Honest 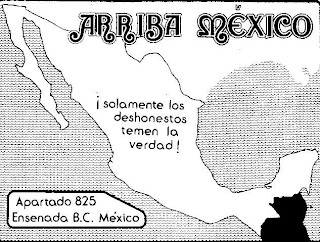 After university I joined a mission organization as a volunteer.

I was 21 years old. This was nearly one-third of a century ago!

I worked in Mexico on a project to distribute Scripture for free.

We also did practical work to help folks in the local communities.

The project was birthed in 1977 following a disastrous hurricane that struck the area around La Paz on the southern tip of the Baja California peninsula. Many volunteers from many countries arrived soon after to help hurricane victims who had lost their homes.

Shortly afterwards and stimulated by the experiences in La Paz, small teams of volunteers from different American and Mexican communities began to work together on what was called Bibles for Mexico. Collectively the many sort-teams teams went village to village, city to city, systematically giving free Bibles and seeing how they could help in practical ways. The goal was to give a free Bible to every home in Mexico, not just in Baja California (one of the 31 states of Mexico).

I joined this project a few months after the La Paz hurricane, in late 1977. We made it a point to mingle and work with the local community. We did things like clothing distribution, played sports with the kids, performed street theatre, and attended/did services at the churches.

It took eight years to cover the entire nine hundred mile span of the Baja California peninsula with free Bibles. The scale of the outreaches ranged from working in the large cities of Tijuana and Mexicali in the north to the many small villages scattered throughout the state.  We actually ended up giving out just the New Testament and in a version that was acceptable to both Roman Catholics and Protestants in Mexico (Dios Llega al Hombre--Good News for Modern Man). It took many teams and many years. But we did it. Together.

One of the amazing things for me in retrospect was that I was able to participate in this extensive project esentially as a volunteer working part-time while I was attending graduate school full-time. I was living and studying in Southern California and was two hours by car from the Baja border. So access to Mexico was pretty easy. Much of the work seemd to be on a learn-by doing basis in consultation with others, especially Mexicans. And there were lots of prayer and encouragement too to support our efforts. I ended up helping to organize and/or being responsible for some 40 outreaches. I could sure tell stories—but some other time!

These were some of my first sustained cross-cultural experiences. I learned so much about the many different types of people in Mexico and my own cultural influences. My Spanish improved of course, and I saw first- hand how God could use all of our strengths and limitations to help others, if we would trust Him and commit to work together. The many lessons, memories, and special people are embedded in my soul. This time was foundational for my future work and responsibilities in member care. These early developmental years in cross-cultural ministry were just so, so special!

One of the main items that impacted me in my early 20s in Mexico was a statement written on the small sticker that you see at the top of this weblog entry. Don’t gloss over these powerful words. We put this sticker on the front page of many of the Bibles that we were giving out. Thousands and thousands of them. It is both a declaration and a warning. As you can probably tell, it means:

“Only the dishonest fear the truth.”

This somber sticker reminds me of our topic of transparency. I still ask myself, in what ways might I be afraid of the truth? The truth about my weaknesses or ways that I have been wrong and need to make amends. We all need to do this. "Who can say, 'I have cleansed my heart, I am pure from my sin.' " (Proverbs 20:9).

Currently there is major concern about the need for greater transparency and accountability in the business world and in Christian ministry. This concern is very welcome. It is well past the time to upgrade our ways in the faith-based sector in these crucial areas.

We may all want to take the lower ethical road and avoid transparency and accountability. We usually do so out of fear of negative consequences, self-interest,  and other reasons which can be rationalized and presented as being reasonable or virtuous. It is such a sad day when this happens in the faith-based sector. It just creates more wounds for the already wounded Body of Christ.

So  I wonder: who among us will act with honesty even if there are negative consequences? Who has the courage to take the higher ethical road of not covering up? "He who conceals a transgresson will not prosper but he who confesses and forsakes them will find compassion." (Proverbs 28:13)

Or what do we actually do when we are aware that there is strong evidence of major organizational misconduct, dysfunction, deviance, and things like covering up serious fiscal impropriety? Perhaps we simply look the other way in hopes that someone else will deal with it. Or we say to ourselves that we must be mistaken or should mind our own business because our leaders and our organizations would never act this way or permit such things to happen. Well, think again. But just don't ratinalize away reality or our responsibilities.

We need courage to take responsibility, to confront, to call for honesty (transparency and accountability) . We must not allow ourselves to be intimidated by the common responses of discrediting, distracting, minimizing, skapegoating, silencing, or harassing.

Acting with honesty and asking for honesty are risky. But when is work in the mission/aid world not risky? The areas of greatest need are often the areas of greatest risk. Sometimes this significant risk lies is within our own organizations, communities, and sectors. Risk is not just out there somewhere in the dangerous, unstable "field" locations  laden with conflicts and calamities.

We say we are willing to lose our life for Christ. This is a noble aspiration. Time will tell. But in the meantime are we willing to risk losing our reputations and our careers for His sake?

Consider this next set of quotes from Bennis et al in Transparency: How Leaders Create a Culture of Candor (2006). Ah—if there were a book I would recommend right now to colleagues in member care and mission/aid it would be this one. Especially the first chapter. May I suggest that you read it and discuss it again and again. Apply it deeply and widely. It is not just about “them.” It is about all of us.

"But at any time an organization makes a seriously wrong decision, its leaders should call for an intensive postmortem. Such learning opportunities are too often overlooked. The tendency is simply to call on the public relations department to spin the mater, to make another inadequately thought-out decision, and perhaps to scapegoat, even fire, a few staff members. Because most companies cover up their mistakes instead of learning from them, systemic flaws in information flow tend to remain to do their damage another day." (pp. 22-23)

"Because denial, self-deception, and hypocrisy are such common features of organizational life, it is often useful for companies to bring in outside "anthropologists," independent observers skilled in identifying potentially toxic behaviors and the hidden values that drive them." (88-89)
*****

1. What are some of your own developmental musings about lessons and principles you learned during your initial cross-cultural experiences?

2. Why is it so hard to act honestly and to admit when we make mistakes?

3. In light of the Bennis quotes above, why is it difficult for organizations to confront their own errors and to ingrain honesty into their organizational ethos?

4. Give at least one positive example of a leader, friend, or organization that gets it right consistently—he/she/they admits a mistake, acts with integrity, and accepts the negative consequences.

Posted by Member Care Associates at 20:29