Living with Our Deepest Differences
Moral wholeness for a whole world 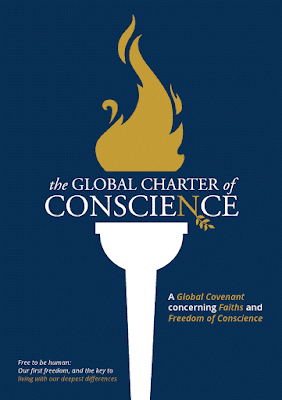 Integrity is moral wholeness—living consistently in moral wholeness. Its opposite is corruption, the distortion, perversion, and deterioration of moral goodness, resulting in the exploitation of people. Global integrity is moral wholeness at all levels in our world—from the individual to the institutional to the international. Global integrity is requisite for “building the future we want—being the people we need.” It is not easy, it is not always black and white, and it can be risky. These entries explore the many facets of integrity with a view towards the global efforts to promote sustainable development and wellbeing.
*****
The Global Charter of Conscience

The word integrity does not appear once in the 2012 Global Charter of Conscience: A Global Covenant concerning Faiths and Freedom of Conscience. Nonetheless, the whole document is based upon and points us towards integrity—lifestyles of integrity which are committed to a “good world” by: acknowledging our deepest differences; embracing rights, responsibilities and respect; embracing freedom of thought conscience and religion; pursuing civility and a thriving public square; and being both citizens of the world and patriots of one’s own country. From our perspective, global civility and its core values, as emphasized in this Charter, requires global integrity. It is the best way to truly combat “global chaos.”
*****

“The Global Charter of Conscience has been drafted and published by a group of followers of many faiths and none, politicians of many persuasions, academics and NGOs who are committed to a partnership on behalf of “freedom of thought, conscience and religion” for people of all faiths  and none. A growing number of academic studies and reports show that “freedom of thought, conscience and religion” is widely neglected and threatened today. A recent Pew Forum report, for instance, says that three quarters of the world’s population live in countries where there is a high degree of menace to their faith—sometimes through government repression, sometimes through sectarian violence, and sometimes through the mounting culture wars that we are now seeing in Western countries. In our global era, it is said that “everyone is now everywhere,” and that “living with our deepest differences” has become a massive global problem, especially when those differences are religious and ideological. This is a huge problem for the future of humankind that must be resolved.” (Quote from the Charter’s website)

A Global Covenant concerning Faiths and Freedom of Conscience
“Keenly aware of the titanic promise and peril of our time, as forms of global interconnectedness reach an unprecedented speed, scale, and scope across the earth, we issue and subscribe to this Charter to address a major world challenge whose resolution will be decisive for the cause of civilization and human flourishing. That is, we address the urgent problems raised by the challenge of “living with our deepest differences” when those differences involve core beliefs, worldviews, and ways of life, and when they are increasingly found within single communities, nations, and civilizations.

Our purpose is to set out a vision of the rights, responsibilities, and respect that will be the foundation of a civil and cosmopolitan “global public square,” and the habits of the heart for those who would be “citizens of the world” as well as patriots in their own countries, and so to advance the cause of a “good world” and thus of global civilization over against the forces of global chaos.”
(opening text of the Charter)
Applications
--Summarize the main point and purpose of the Charter in one sentence
--List a few applications for how you would want to live out the Charter with integrity.
--Read the Charter!

Posted by Member Care Associates at 22:11