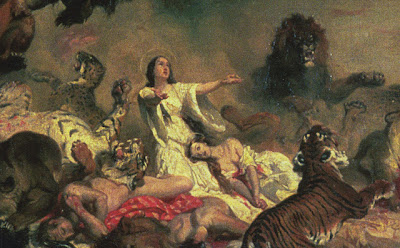 "Perpetua was not alone in her cell. She had her baby boy, no more than a few weeks old, and she was thankful for this…She kept him with her all the time and fed him at her breast in the hot, fetid darkness of the crowded cell. And she prayed for him: that he too, as he grew, would come to know the way of truth – and not fear to follow it. Then there was Felicitas, faithful Felicitas, a servant but far more than a servant. She was a sister in Christ, and a dear friend. Felicitas was afraid, but not of death; she was afraid that she would be left behind. Even the Roman Empire did not execute pregnant women, and Felicitas was eight months with child…."
.
When the day of their trial was announced, Perpetua’s father came again… “Daughter,” he said. “Pity my grey hairs! Have pity on your father, if I am worthy to be called your father. Don’t make me a cause of mockery before men. Don’t bring about our ruin, for none of us will dare to show his face if you are condemned.” He threw himself at her feet, and wept in despair, imploring her to turn back from the wretched and abhorrent path she had chosen. She stood before him quietly, waiting for him to finish what he had to say. He said it, and left, heavy-hearted; he took with him her baby son….Sentence was pronounced and she was condemned, with the others, to face the wild beasts in the arena."
.
"The next day, the 7th March AD 203, Perpetua, Felicitas, and the three young men, Saturus, Saturninus and Revocatus were led out into the arena – the public amphitheatre where the games and chariot races were held. They felt relief that their ordeal would soon be over, and gladness at the thought of the welcome they would so soon receive in their heavenly home. They were beaten as they passed between the lines of soldiers...The vast crowd roared around them from the benches as they walked bravely into the open space in the middle of the amphitheatre. At last the beasts, enraged by hunger and the goadings of their captors, were turned loose... "
.
Excerpted from:
This Holy Seed: Faith, Hope, and Love in the Early Churches of North Africa. Robin Daniel (1992).
.
More info:
“Perpetua and Felicity, ”New World Encyclopedia , retrieved from  http://www.newworldencyclopedia.org/entry/Perpetua_and_Felicity
.

*****
Be faithful unto death and I will give you the crown of life.
Jesus Christ, Revelation 2:10


Posted by Member Care Associates at 00:01