Culture and Diversity in Member Care—Part 7 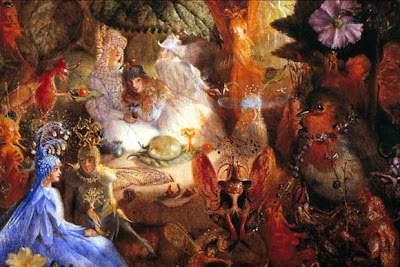 The Captive Robin, John Anster Fitzgerald, c.1864
Up the airy mountain, down the rushy glen,
We daren’t go a hunting, for fear of little men.
Wee folk, good folk, trooping all together;
Green jacket, red cap, and white owl feather….
By the craggy hillside, through the mosses bare,
They have planted thorn trees, for pleasure here and there.
Is any man so daring, as dig one up in spite,
He shall find their sharpest thorns, in his bed at night.
The Fairies by William Allingham (1824-1889)
*****
Elves, spooks, dwarves, demons, spirits, faeries, jinns, and all kinds of other-worldly creatures. The folklore of people around the world—and their serious belief systems too—are filled with them. Some of these entities are seen as elusive, playful, and mostly benign; others are viewed as noisome pranksters whose mischief interferes with one’s work and life; and still others are seen as malignant predators who can destroy people and thus need to be avoided or placated on a regular basis.
In member care, as in life, we want to promote understanding, respect, and competency regarding human diversity and cultural variation. Yet how far do we go when someone’s belief system significantly contrasts with our own worldview, scientific approach, and understanding of the development and resolution of human health issues? In some cases we can find some sturdy common ground (e.g., seeing sadness as being related to hard experiences). In other cases though the only common ground is quicksand (e.g., an acute life-threatening bout of appendicitis or cerebral malaria being related to the evil eye and needing to be treated via a potion or talisman.)
As the culture-bound syndromes and international case studies below indicate, people from so many cultures do in fact attribute their “visible wellbeing to invisible beings” along with nasty curses and a host of other ideas which baffle our understanding of “cause and effect” (e.g., shenkui in China involves marked anxiety or panic accompanied by semantic complaints in males, attributed to excessive semen loss.) Many cultures still view human health, including the origin and cure of problems then, as inextricably influenced by a supernatural or at least paranormal world.
Ready to be stretched in your understanding of mental health in different cultures? If so, tighten your belts, unpack your conceptual bags, put your conventional member care tools temporarily in the file cabinet, and try to get a hold of (and grasp!) the “unusual” materials from the sources below!
Or if you can’t wait to locate/access these sources, then check out Curious Mental Illnesses Around the World and read the short descriptions of koro, latah., brain fag, anorexia, and amok.

For an overview of culture bound syndromes, go to: http://homepage.mac.com/mccajor/cbs_intro.html