Culture and Diversity in Member Care—Part 5 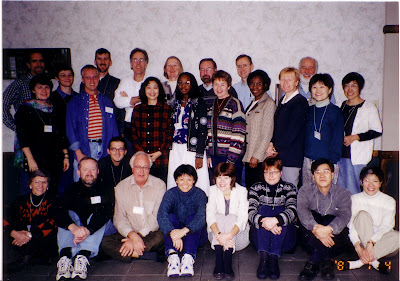 International Member Care Retreat 2000
El mar sus millares de olas mece divino.
Oyendo a los mares amantes mezo a mi niño…
Dios Padre sus miles de mundos mece sin ruido.
Sintiendo su mano en la sombra, mezo a mi niño.
Gabriela Mistral, Desolación, 1922
The sea rocks its countless waves
God rocks His countless worlds
Hearing the loving waves
Sensing God in my world
I rock my child.
*****
Mission/aid workers, like the people with whom they work, are a hugely diverse and culturally varied group. As mentioned in the last entry, there are about 400,000 foreign mission workers and nearly 12 million national workers, according to the estimates from Johnson, Barrett, and Crossing, in the January 2010 issue of the IBMR. We thus want to better equip ourselves to deal with such diversity and thus make member care as relevant as possible. In short, we want to encourage understanding, respect, and competency regarding human diversity and cultural variation.
Let’s have a look at one professional body’s comments on culture and gender—resolutions from the American Psychological Association (APA, 2004). There are of course similar perspectives from other fields/professional bodies and countries. It would be fascinating to review and compare many of these. It would also be helpful to use these materials as a springboard to write some trans-culturally relevant guidelines on cultural variation and diversity in member care! These guidelines would be helpful for further developing multi-cultural competence.
Keep in mind that although it is not explicitly stated in this document by the APA, much of the thinking is founded upon the 1948 Universal Declaration of Human Rights (UDHR) and subsequent human rights-related instruments. See especially the Preamble and Article 1 which recognize  “the inherent dignity" of eveyone; that "the equal and inalienable rights of all members of the human family is the foundation of freedom, justice and peace in the world;” and that “All human beings are born free and equal in dignity and rights. They are endowed with reason and conscience and should act towards one another in a spirit of brotherhood.” These principles from the UDHR in turn can be definitely linked to core principles in Judeo-Christian thinking on the intrinsic worth of humans as beloved image bearers of God.
The Resolutions from the APA (excerprted below) are obviously very USA-centered. They are nonetheless heading in the right direction as they call to internationalize the field of psychology in general and increase the multi-cultural competence of American psychologists in particular. Note that in the entire document there are actually 26 “Whereas” statements and 12 “Let it be resolved” statements.
*****
Resolution on Culture and Gender Awareness in International Psychology   American Psychological Association, 2004
(Excerpts--click on the title/link above for the full version)
"WHEREAS an estimated 60 percent (or more) of the world's psychologists now live outside the US...
WHEREAS psychologists outside of the US have generated perspectives, methods and practices that correspond to the needs of the people in their societies and data that are relevant to the development of a more complete psychology of people...
THEREFORE LET IT BE RESOLVED that the American Psychological Association will:
(4) encourage more attention to a critical examination of international cultural, gender, gender identity, age, and disability perspectives in psychological theory, practice, and research at all levels of psychological education and training curricula.
(5) encourage psychologists to gain an understanding of the experiences of individuals in diverse cultures, and their points of view and to value pluralistic world views, ways of knowing, organizing, functioning, and standpoints.
(6) encourage psychologists to become aware of and understand how systems of power hierarchies may influence the privileges, advantages, and rewards that usually accrue by virtue of placement and power..."
Reflection and Discussion
1. What other guidelines/statements in this area of culture/diversity/gender are you familiar with?
2. What would be three succinct principles or areas to emphasize in a member care statement about awareness of human culture, diversity, and gender?
3. Describe how some of these principles in the APA Resolutions relate to Scripture and/or the UDHR.
4. It can be argued that it takes some professional bodies a long time to catch on to the relevance of cultural variation, human diversity and gender equality. Why is this so? Any examples?
5. How could the APA Resolutions be useful to further develop multicultural competence for you in your work and setting?
Posted by Member Care Associates at 01:17