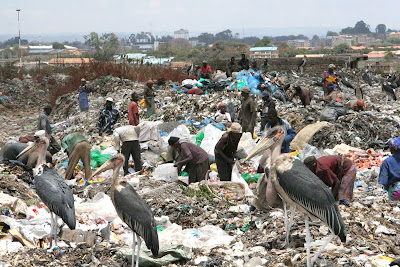 The Dandora Municipal Dumping Site, Nairobi, Kenya, October 2007, is a serious threat to children living nearby and the city’s general environment, according to the UN Environment Program. © Julius Mwelu/IRIN(Worldwide more than a billion people live in slums, with as many as one million living in in Kibera, Nairobi, Africa’s largest slum.)
*****
"…the most stressful events in humanitarian work have to do with the organisational culture, management style and operational objectives of an NGO or agency rather than external security risks or poor environmental factors. Aid workers, basically, have a pretty shrewd idea what they are getting into when they enter this career, and dirty clothes, gunshots at night and lack of electricity do not surprise them. Intra-and inter-agency politics, inconsistent management styles, lack of team work and unclear or conflicting organizational objectives, however, combine to create a background of chronic stress and pressure that over time wears people down and can lead to burnout and even physical collapse." (p. 6). John Fawcett, Stress and Trauma Handbook: Strategies for Flourishing in Demanding Environments (2003, World Vision)
*****
Here is the next set of resources to help mission/aid workers and others who live is dangerous places. Keep in mind that “dangerous places” is being defined broadly. It primarily refers to physical environments marked by life-threatening hazards including war, human rights violations, poverty, and disease. It also refers to organizational environments, as John Fawcett aptly notes in the opening quote, in which poor management/governance can wreak havoc on both staff and operational objectives. Some would also say that the most hazardous place in the world today, where an estimated 40+ million humans experience terminal stressors each year, is the womb.
Resource Three

Mainstreaming Safety and Security Management in Aid Agencies, Humanitarian Policy Group Briefing, March 2001 by Koenraad van Brabant. This Briefing gives a quick overview of the issues involved in staff security. It is based on a larger report and related to the author’s field manual, Operational Security Management in Violent Environments (2000) available for free download from the Humanitarian Practice Network (HPN). Note that this manual is being updated and the revision should be available this year. This manual offers vey detailed guidelines and practical information and is one of the main references in mission/aid. Note also that HPN has done updates on providing aid in insecure environments in 2006 and 2009.
Resource Four

Responsible Logistics for Hostile Places is a case study on the expulsion of various mission/aid workers from a country How did this group fare, how did their national friends in the country fare, and what did the organization do to support them all? Find out in The Perils of Pioneering, chapter 43 in Doing Member Care Well (2002). This chapter can be used as a learning tool to help you/your group prepare for similar situations involving sudden evacuations in the context of religious/political issues.
Reflection an Discussion

Given the Close Protection & VIP Security Service in South Africa as well as the rest of the world, businesses today need to be aware of potential security threats and protect themselves in the necessary ways.