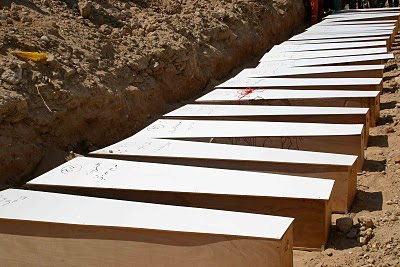 Lebanese authorities bury 30 bodies in wasteland outside Tyre, Lebanon.
The bodies had lain unclaimed for 10 days in the burned-out shells of cars,
or scattered around the war-ravaged villages of south Lebanon. [civilians]
(Courtesy IRIN. ©2006 Hugh Macleod/IRIN http://www.irinnews.org/)
*****
The single greatest problem facing the United Nations is that there is no single greatest problem. Rather, there are a dozen different ones each day clamoring for attention. Some…are obvious and trying. Others we call “problems without passports”—issues that cross all frontiers uninvited, like climate change, drug trafficking, human rights, terrorism, epidemic diseases, and refugee movements. Their solutions, too, can recognize no frontiers because no one country or group of countries, however rich or powerful, can tackle them alone. Shashi Tharoor, Newsweek, September 4, 2006
*****
We want to focus on serious threats to life in mission/aid settings. The emphasis is on issues regarding resources to support mission/aid staff, sending agencies, and civilians in the midst of dangerous places.
What are Dangerous Places?

• Dangerous places are areas affected by calamities and conflicts, including those not in the public limelight such as neglected emergencies and forgotten wars.
• Dangerous places are those vast, trans-border regions where uninvited “problems without passports” can linger and take their deadly toll (malaria, corruption, human trafficking).
• Dangerous places are also the sending group contexts for mission/aid workers in which unresolved interpersonal conflict and poor organizational/management practices can have major negative impacts on staff well-being and operational effectiveness.
Resource One

Dangerous Mission is a special 28 minute BBC audio documentary and part of their “Heart and Soul” series. Have a listen—it is well-worth it. The documentary features interviews with mission workers whose lives are in danger due to the nature of their work. Why do they work in places hostile to the Christian gospel and why do they take risks? The documentary also includes some perspectives from those who believe their own mission work can be jeopardized by people who overtly evangelize in hostile countries and perspectives from people from other religions who oppose their work. This is a fascinating subject and obviously not one without controversy!

Resource Two
Doing Member Care in Red Zones: Examples from the Middle East is on of several articles in Doing Member Care Well (2002) that deal with surviving/working in dangerous places. The authors do a great job looking at warning signs of serious stress for workers in "red zones": areas marked by ethno-political tensions, social instability, and violence. There is also material to help administrators and sending organizations as they manage/support their staff.
Reflection and Discussion

1. What are a few of the main issues overviewed in the Dangerous Mission interviews above?
2. What are acceptable risks for you in your work (or for yourt workers if you are an admistrator/leader) in mission/aid? How far do you go (risks) to help vulnerable people?
3. Would you want your adult child to be an aid/worker in a risky area, such as a war zone?
4. Would you want your child to be converted to another religion or to no religion, via the influence of foreign workers or “proselytizers.”
5. Is it OK to come into another country for reasons other than the stated ones, with the primary intent to share one’s religious faith/and/or convert others? How does this practice relate to Articles 18 and 19 in the Universal Declaration of Human Rights, regarding the right to have a religion or not to have a religion and freedom of conscience?
Posted by Member Care Associates at 11:56