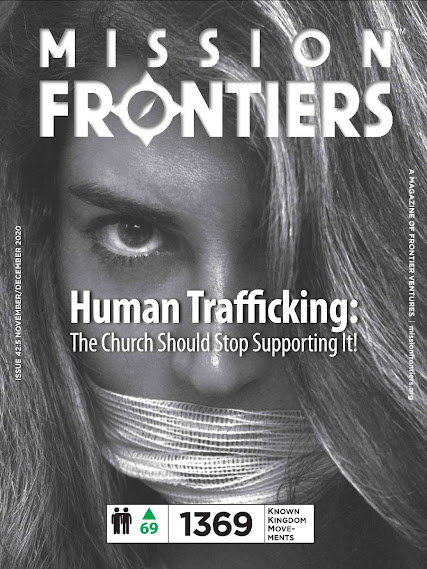 --“People are trafficked for sexual exploitation, forced labour, forced begging, forced marriage; for selling children and as child soldiers, as well as for removal of organs;

Most victims are trafficked within their countries’ borders – those trafficked abroad are moved to the richest countries.”

Mission Frontiers
Jesus Asked Us to Rescue the Perishing and Set the Captives Free (introduction to Special Issue)
“Human trafficking is a topic that I wish I did not have to cover in the pages of Mission Frontiers [10 articles]. It is ugly and disgusting and does not make for a “pleasant” reading experience. But as followers of Jesus we must sometimes face the ugliness of our world head-on in order to do what is right in the sight of our Lord. We have done our best to present this topic honestly, but with a great deal of discretion in describing the abuse that these modern- day slaves experience. Some readers may object to our covering this topic at all, but the sheer tragedy of 25+ million precious people being enslaved in our day demands that we as Jesus followers speak up in their defense.”  Rick Wood, Editor

Unreached Peoples & Trafficking? (one of the 10 articles in the Special Issue)
“Why an issue of Mission Frontiers on the global tragedy of trafficking? How does this connect in some way to our purpose of advancing and catalyzing movements to Jesus among the least reached peoples of the earth? I want to address that from several lenses, but it might be good first to state as simply as possible what is meant by trafficking." Kevin Higgins, General Dirctor, Frontier Ventures

Human Trafficking and the SDGs
Three Necessary Steps to Achieve the Sustainable Development Goals on HumanTrafficking.
International Organization for Migration Ashraf El Nour, 28 July 2016
"Addressing human trafficking will only be possible with on-going and enhanced cooperation with all partners working on this issue to strengthen strategies that support prevention of the crime, protection and direct, comprehensive assistance to victims, and prosecution of offenders.

Progress in the other Goals is essential to a strengthened, comprehensive approach to combatting trafficking, for example, in the areas of poverty eradication (Goal 1), gender equality and women’s empowerment (Goal 5), promoting full and productive employment and decent work (Goal 8), reducing inequality within and among countries (Goal 10), and providing access to justice for all and building effective, accountable and inclusive institutions (Goal 16).

Target 10.7, which seeks to facilitate safe, orderly, regular and responsible migration, is also critical. It recognizes that realizing the benefits and full potential of migration, while addressing risks such as human trafficking, requires well-managed and well-governed approaches to migration and human mobility. Giving effect to these targets and measuring progress will require enhanced efforts in a range of areas, including data collection. Currently, the Inter-agency and Expert Group on the SDGs is devising a set of indicators to monitor all 169 targets of the 2030 Agenda, including on trafficking and migration-related targets."
__________ 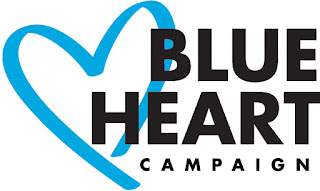 World Day Against Trafficking in Persons (30 July)
“This year, we will focus on the first responders to human trafficking. These are the people who work in different sectors - identifying, supporting, counselling and seeking justice for victims of trafficking, and challenging the impunity of the traffickers.

During the COVID-19 crisis, the essential role of first responders has become even more important, particularly as the restrictions imposed by the pandemic have made their work even more difficult. Still, their contribution is often overlooked and unrecognized.

Through stories from first responders describing their practical work in assisting victims we intend to spotlight their contribution and that of their function, institution, organization, team, or community and its impact on fighting trafficking. The key messages focus on the positive, recognizing the importance of the work done by first responders, as well as seeking support and raising awareness that these actions need to be sustained and replicated. The stories will also highlight how first responders remained committed during the pandemic.

Global Slavery Index 2018. Walk Free.
"In 2016, 40.3 million people were living in modern slavery. It exists in every corner of the world, yet is seemingly invisible to most people. Unravelling this problem requires sustained vigilance and action..."

_________
TBD
Human Trafficking and UPGs-SDGs
Examples and Applications
--Scoping study: Joint Learning Initiative on Faith and Local Communities,  The Role of Local Faith Actors in Anti-Modern Slavery and Human Trafficking (2019).
--Coming soon: Global Integration Update (December 2020), Genocide: Studying, Preventing, Confronting, Punishing, Healing...Weeping. "In this Update we feature the contributions from genocide scholar Dr. Jane Gangi. As the Guest Contributor, she shares her perspectives as well core resources for understanding, preventing, and confronting the crime of genocide. Historical examples of genocide and current crises are also highlighted, noting that genocide in its many insidious forms continues to plague humanity and that confronting it entails political, social, and personal action--and risks."
--Coming soon: Member Care Update (December 2020), Persecution Pandemics: What is Jesus Worth? The Insanity of God--The Hope of Humanity. “In this Update we focus on persecution: the persecution of Christians around the world through harassment, imprisonment, torture, and death (part one), and the persecution of humans around the world through genocide, trafficking, racism, and corruption (part two). It is a tough Update to navigate because the topics are uncomfortable, perplexing, perhaps overwhelming, egregious, often horrific and they are extremely resistant to real change and sustainable solutions.” 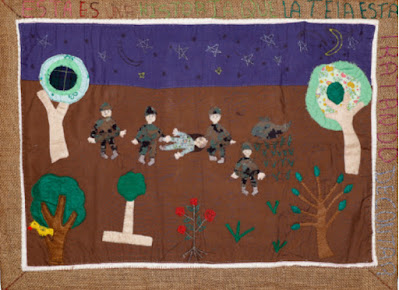 The Power of Creativity: A Path to Healing for Survivors of Sexual Violence, War, and Displacement (23 November 2020), Global Geneva. “The Rosebush’ is a story cloth created by a woman whose teenage daughter was raped and murdered in front of her by men who had broken into their home at the dead of night. After escaping from Colombia to Ecuador, she joined a women’s circle facilitated by The Common Threads Project. Creating story cloths gives survivors the opportunity to heal and to bear witness to the trauma and sexual violence that are endemic in conflict situations. Catherine Butterly, psychotherapist, trainer and Adviser for the Common Threads Project, spoke to Sarah Grosso, anthropologist and gender consultant, about the healing powers of creativity and the resilience and courage of survivors of SGBV (sexual and gender-based violence) in conflict.”
Impact of Human Trafficking on Health: Trauma, 1 December 2020, webinar, Henry Dunant University, Geneva. "International webinars on human trafficking in the light of the 5th anniversary of Laudato Si and of the new Fratelli Tutti encyclical.
Posted by Member Care Associates at 11:26