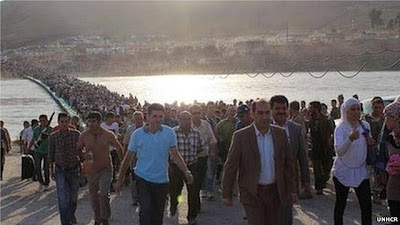 "Thousands of refugees from Syria are pouring over the border into Iraqi Kurdistan, the UN refugee agency says." Click here or below to watch the two minute BBC report: http://www.bbc.co.uk/news/world-middle-east-23745201


"...the world community has further advanced [the international human rights] dimension of its mission [more] than in any other field, and the international consciousness about genocides and other abuses of rights is higher today than at any other time...the disappointments come with the knowledge--amply provided by UN agencies, the churches, Amnesty International, Human Rights Watch, and others--that so many governments, large and small, are still acting in defiance of the Universal Declaration [or Human Rights], the Geneva conventions [the rules of international humanitarian law in armed conflicts], and all subsequent protocols. Few countries have completely clean hands, a number of them are major culprits, and where political order has collapsed, the atrocities multiply. ...international pressure against abuses has to be kept up...But the real improvements will come in the hearts and consciences of humankind, not in additional machinery [that is, structures and documents]. Paul Kennedy, The Parliament of Man: The Past, Present, and Future of the United Nations (2006), excerpts from chapter 8, "The Promise and Peril of the 21st Century" pp. 272-273, bold font added
*****
"When reports come in of wars and rumored wars, keep your head and don’t panic. This is routine history; this is no sign of the end. Nation will fight nation and ruler fight ruler, over and over. Famines and earthquakes will occur in various places. This is nothing compared to what is coming....Staying with it—that’s what God requires. Stay with it to the end. You won’t be sorry, and you’ll be saved. All during this time, the good news—the Message of the kingdom—will be preached all over the world, a witness staked out in every country. And then the end will come....This is going to be trouble on a scale beyond what the world has ever seen, or will see again. If these days of trouble were left to run their course, nobody would make it. But on account of God’s chosen people, the trouble will be cut short....Then, the Arrival of the Son of Man! It will fill the skies—no one will miss it." Jesus Christ, excerpts from Matthew 24, The Message, bold font added

Posted by Member Care Associates at 16:44