Safety and Protection in Dangerous Places—Part 5 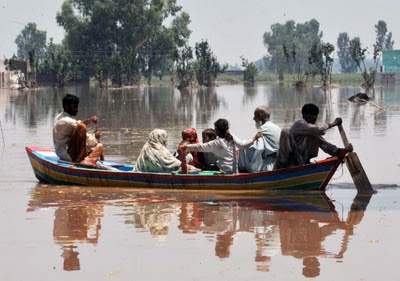 Pakistan,  August 2010. ©Abdul Majeed Goraya/IRIN
More and more areas are being inundated as floods spread south.
Over 20 million people are affected in the worst floods in Pakistan's history.
**
Defend the cause of the weak and fatherless;
maintain the rights of the poor and oppressed.
Rescue the weak and needy;
deliver them from the hand of the wicked."
Psalm 82:3-4
(Scriptures on the poor/afflicted: click here)
**
But the world is not so happy a place. Billions of people suffer impoverishment, many until the end of their miserable lives…[Such things] should not deter us from responding as best we can, using our talents to improve this always mixed record of trying “to save generations from the scourge of war,” “to reaffirm faith in fundamental human rights,” and to promote “social progress and better standards of life in larger freedom.” The question is, can we do it? Paul Kennedy, The Parliament of Man: The Past, Present, and Future of the United Nations (2006, pp. 279, 289).
*****
Everyone loves real heroes. Right? They inspire us. They can protect or even save us. We want to emulate them. I have thought a lot about heroic people. On the top of my list are the poor: who have no exit visas from misery; who are plagued by problems without passports; who live in dangerous places; and who nonetheless continue onward in life as dignified human beings with integrity. These people are my heroes and my heroines.
Poverty Environments
In this entry I want to continue to expand our definition of “dangerous places.” It now includes five broad areas or "environments" with the latest one being "poverty environments." Notice in the list below that the first letter of each of the five areas forms the acronym POMPP. The word “pomp”—stately splendour—is virtually antithetical to the “stagnant squalor” being discussed in this current entry.
•Physical environments marked by life-threatening hazards including war, human rights violations, poverty, and disease (as well as road traffic and household-related accidents)
•Organizational environments in which poor management/governance can wreak havoc on both staff and operational objectives (including unresolved relational difficulties and ongoing organizational dysfunction)
•Moral environments contaminated by human corruption which exploits and injures others (Corruption is defined by Transparency International as the ‘abuse of entrusted power for personal gain.’ Covering up or ignoring corruption can be as reprehensible and damaging as the corruption itself.)
•Personal environments whereby an individual's serious problems can significantly interfere with his/her by th work/wellbeing and that of others.
•Poverty environments as reflected in the living situation of the nearly one billion slum dwellers and overlapping with the “bottom billion” who reside in the 58 poorest countries in the world in which the average life expectancy is 50 years, one out of seven children die before their first birthday, and over one-third of children suffer from long-term malnutrition (see The Bottom Billion by Paul Collier, 2007, pp. 7,8). Note that eradicating extreme poverty and hunger is one of the eight Millennium Development Goals (MDGs) set by the United Nations for 2015.Watch the short overview about the MDGs called Make It Happen, in the MDG link above.
I am now shifting the safety and protection focus of these entries–-from the mission/aid workers themselves to the vulnerable people for whom mission/aid workers provide services. Many of these people are in dangerous places marked by conflict, calamity, corruption, and poverty. Here are two resources to better understand and develop skills to help some of the people in these places. They are oriented to states, agencies, and field workers.
(Note: for more information on staff security issues, see the previous entries/resources as well as the June 2010 issue of the Humanitarian Exchange Magazine especially the article “Staff Management and Security.”)
*****
Resource Nine

Humanitarian Protection (Issue 46, March 2010), Humanitarian Exchange Magazine, Humanitarian Practice Network (text below from the online summary at HPN)
“…After little more than a decade, ‘protection’ has grown from a collection of activities executed by a handful of specialised agencies to being a key component of humanitarian action. Yet protection issues are still not systematically identified and addressed in humanitarian response and advocacy. In his thought provoking lead article, Marc Dubois argues that humanitarian actors must develop a more critical perspective on humanitarian protection, including an honest acknowledgement of their limitations. Related issues are examined in articles focused on the civilian protection mandates of peacekeeping missions and the challenges the protection cluster in Timor-Leste faced during the transition from emergency to development programming.
We also examine World Vision’s work to develop and test minimum standards in protection, a new field manual from ActionAid Australia, and efforts to develop more community-based approaches to protection in Afghanistan, Burma, Kenya and Pakistan.”
Resource Ten
UNHCR Handbook for the Protection of Women and Girls (2008)
(text below from the Introduction; note: also avaible in several other languages)


“This Handbook describes some of the protection challenges faced by women and girls of concern to the Office of the United Nations High Commissioner for Refugees (UNHCR) and outlines various strategies we should adopt with our partners to tackle these challenges. It sets out the legal standards and principles that guide our work to protect women and girls and outlines the different roles and responsibilities of States and other actors. UNHCR’s own responsibilities in this respect are explained, both as part of its mandate to secure international protection and durable solutions and as a United Nations (UN) agency. Suggestions for actions by UNHCR and partners to support women’s and girls’ enjoyment of their rights are also included. Examples of innovative practices from the field illustrate how these principles can be applied.
Who are women and girls of concern? This Handbook refers to the protection of women and girls with the understanding that we are referring to all women and girls of concern to UNHCR, namely women and girls who are: asylum-seekers, refugees, internally displaced, returnees, stateless, or who have integrated into new communities."
*****
Reflection and Discussion—Add Comments Below