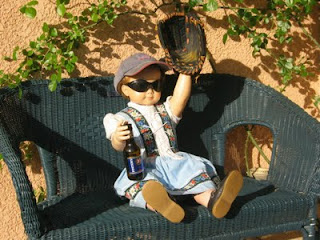 What things do you remember when you were five years old?

Anything about being honest and fair?

I wonder what Josephine above would say.
She looks to be about five but she is actually 45 years old.

She was and still is Michele's doll.
She's a member of our family.
Josephine over the years has watched us all learn to play fair.

I vividly recall a lesson in transparency that occurred when I was five. The lesson began with my eyeing the money-laden offering basket coming my way during a church service.

I was sitting next to my father. He had just given me a quarter (25 US cents) for the offering. But as I held that quarter in my hand, and as the basket steadily progressed towards the pew where all six members of my family sat, a brilliant idea occurred to me. What if I substituted the six pennies (one cent coins) that were in my pocket and kept the quarter instead? It seemed like a good deal and a win-win situation. The church and God and I all would benefit.

There was a problem though. I was not too adept at things like this. Another problem was that my nearly omniscient dad saw me, I realized after the fact, as I carefully, I mean slyly, put in my pennies. After the basket passed he turned to me and whispered: “Give me the quarter”, which I did. Then he said “You just lost your pennies.” My heart sank and my gaze did too.

I will never forget how suddenly my clever, spontaneous plan had fallen to pieces and the shame I felt in having been discovered by someone who I looked up to. It was a hard but necessary learning experience. My understanding of justice and my understanding of self-deception really made progress that Sunday morning. I am very grateful to my father for his wise intervention.

Transparency is Virtuous
Transparency refers to appropriately disclosing what is really going on in our work and lives, for better or for worse. Of course it would be helpful to discuss what "apppropriately disclosing" means. But for now let me just say that it means far more than simply abiding by minimal legal or minimal ethical standards. It means sharing accurate and full information with people to whom we are accountable. It means verifying, in terms of my story above, that we have given our quarters as expected and not our pennies. It also means saying that we gave pennies when we should have given quarters.

Transparency reflects our character and who we are. It is a core part of being honest and provides important evidence that we are trustworthy. Transparency and honesty are developmental virtues. We learn them over time and throughout our entire lives. Higher levels of transparency are motivated not simply to avoid negative consequences but rather to live in accordance with internalized ethical values.

"A vital lie [in troubled families] masks a truth that is too threatening, dangerous, or painful to be spoken aloud. The vital lie preserves the surface harmony of the family but at great cost. Problems that are not acknowledged rarely get better on their own." (34)

"The emotion that seals people's lips about vital lies is the unconscious fear that if we look at and speak about these dangerous secrets, we will either destroy the family or be expelled from it. The anxiety of living with these secrets is often allayed by ignoring them." (35)

"Just as in families, organizational secrets distort relationships. Those sharing the secret tend to form a tightly knit bond while distancing themselves from outsiders, thus cutting themselves off from those who might expose them as well as those who might influence them in positive ways." (p. 37)

1. Recall an experience in your life when you were confronted for your lack of transparency. What did you feel and what did you learn?

2. Is there someone right now with whom you would like to be transparent? How could you do this?

3. Think of a couple applications—positive and negative—of the quotes from Bennis et al to an organization with which you are familiar. How does transparency affect the organization?
*
4. Let's suppose you have a favorite doll or stuffed animal that watched your actions over the course of your life so far. Sort of like Josephine in the picture above. This benevolent, forthright, and faithful companion could summarize the extent to which you play fairly, honestly, and transparently. What would the doll/stuffed animal say about you, in one to five sentences?

Posted by Member Care Associates at 19:21